The event, Leicester Global Links, was the part of the BFPG’s National Engagement Series. Co-hosted with Midlands Economic Forum and the University of Leicester,  the event looked at Leicester and the East Midland’s economic and soft power capabilities.

The following post was written by Paul Brummell, Head of Soft Power and External Affairs Department at the Foreign and Commonwealth Office. Paul was a panellist on the second panel session: Soft Power Perspectives.

I headed on Wednesday to Leicester, for two events organised by the think tank the British Foreign Policy Group. One was an induction programme for its enthusiastic cohort of Student Ambassadors, a new scheme to engage students in the public debate on UK foreign policy, including through encouraging them to produce short articles for online publication and supporting them to convene foreign policy discussions with fellow students at their universities. The second was a seminar featuring a range of local business, civil society and university voices to discuss Leicester’s global links.

Joseph Nye, who coined the term soft power, has explored the theme largely from the perspective of nation states, but the seminar offered an interesting opportunity to look at soft power from the point of view of an individual city. Cities are becoming increasingly important actors in international relations, the home of an ever increasing proportion of the world’s population, and international city-to-city engagement is flourishing across the globe. The cross-Whitehall Prosperity Fund recognises this in its Global Future Cities programme, aiming to promote sustainable, inclusive and economic growth in nineteen cities across ten countries.

But what does the soft power of a city like Leicester look like? In part, the international profile of any city is shaped by its economy. Leicester’s rapid development in the Industrial Revolution, its specialisations in hosiery, textiles and footwear, and later engineering, and its association with iconic brands like Walker’s Crisps, simultaneously form its trading footprint and shape its international image. The statue of local entrepreneur Thomas Cook, suitcase at his feet, outside Leicester’s distinguished Victorian railway station, is testimony to its international outlook.

We heard at the event from Professor Martin Barstow, Director of the Leicester Institute of Space and Earth Observation, how the city is becoming a hub for the UK space economy, building on a distinguished tradition of space science research at the University of Leicester, and highlighted by the presence in the city of the National Space Centre. There are exciting plans ahead for the development of Space Park Leicester, bringing together business and research.

Culture and heritage are of course central to soft power, and the profile of Leicester’s heritage received a major boost with the discovery of the skeleton of King Richard III in a local car park and his 2015 reburial in Leicester Cathedral. The city’s strong sporting traditions comprise an important part of its soft power. The sad death earlier this week of Gordon Banks was a reminder again of the global footballing talent associated with Leicester City FC. Likewise Rugby Union, through Leicester Tigers, and Basketball, with Leicester Riders.

The city’s literary connections are varied. Many people around the world have discovered the place through the diaries of Adrian Mole. At the seminar, Dr Emma Parker, Associate Professor in Post-War and Contemporary Literature at the University of Leicester, highlighted her efforts to get playwright Joe Orton more firmly recognised as a distinguished member of Leicester’s literary greats. The international dimension to this activity includes a collaboration with the Amsterdam-based Beautiful Distress Foundation.

The higher education sector is an important element of UK soft power, both through the attractiveness of our universities as centres of teaching excellence and because of their importance in cutting-edge research. Leicester has a strong profile through both De Montfort and Leicester Universities, the latter the host of the seminar, as well as the nearby University of Loughborough.

But in many ways the most important component of a city’s soft power is its people. Leicester’s economic development provided a spur to the emergence of a strongly distinctive part of its profile: that of a multi-cultural city. With post-war Polish and Irish communities supplemented by large-scale arrivals from South Asia from the 1960s, Ugandan Asians in the 1970s, and more recently Somalis and Central Europeans, Leicester has become a city which through its Diaspora is strikingly international in composition and outlook. According to 2011 census figures, 33.6% of people in Leicester were foreign born, against an England average of 13.8%. This cultural diversity means that a particularly high percentage of the population of Leicester has direct experience of, and close family connections with, other countries, and are directly interested in the fates and fortunes of those countries. 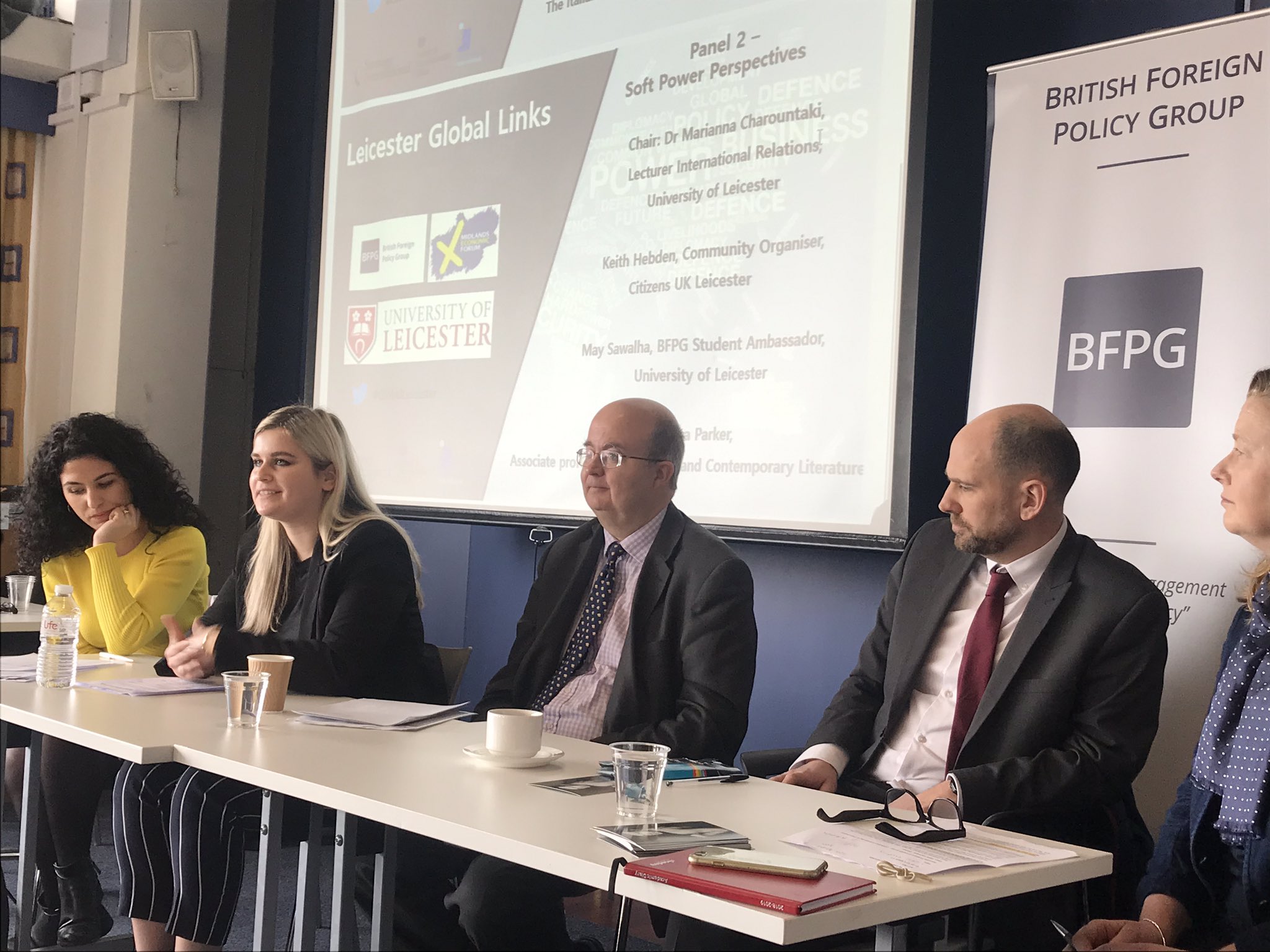 And can a city exert soft power through values associated with it? One of Leicester’s most famous sons, Simon de Montfort, has something of a mixed reputation. He is strongly associated with anti-Semitism and with the expulsion of Jews from Leicester in the thirteenth century. But he is also associated with the development of parliamentary democracy in Britain, in convening parliaments which both curbed the authority of the King and included ordinary citizens. Leicester was a Parliamentarian stronghold in the English Civil War, and was associated with a strong Radical tradition during the Victorian period. In 1936, hosting the Jarrow marchers, the Co-Op provided them with a change of boots. Support for parliamentary democracy and radical politics seem then to run like threads through Leicester’s story.

Leicester has six twin cities: Strasbourg, Krefeld, Masaya in Nicaragua, Chongqing, Rajkot and Haskovo in Bulgaria. But its international ambitions extend far beyond these formal municipal connections. Leicester’s soft power expresses its place in the world, and it is important for government at the national level to recognise and engage with the soft power of our cities as a distinctive component of the UK’s soft power as a whole.

This article was first published on https://blogs.fco.gov.uk/author/paulbrummell/